Posted at 12:14h in Sexual Health by Walker Thornton 0 Comments

Do Foods Really Turn Us On? first appeared on Midlife Boulevard.

Afterthought: Eating a fresh fig this morning I realized that what we’ve done with food to give it sensual appeal is to be in the moment–to attend to its color, shape and scent.  By being conscious of what we’re eating, and the setting, food takes on meaning. Take a look at the fig and notice the rich color, its shape, imagine the delicate taste on your tongue. Pair the plate of raw oysters with a candlelight dinner and a person you care about. The strawberry delicately touched to the tongue, the seductive play between two people feeding each other…. How we approach food is what gives it that aphrodisiac label.

On Mondays one of our local restaurants serves raw oysters for a dollar each. Last Monday the bar was packed with men who appeared to be in their 50s and older. I wondered if they were there for the camaraderie and world cup soccer or the rejuvenating power of oysters?

Several articles floated through my news stream this week on libido-enhancing foods. Of course oysters featured in several and to my surprise, so did watermelon. Apparently watermelon makes us feel sexy. It makes me feel messy and a little juvenile—the dripping juices and the child-like delight of spitting the seeds across the deck into the yard below.

Throughout history we have looked for the magic pill or exotic food to make us feel sexier—regardless of age. Today we’re bombarded with articles about foods that will supposedly rejuvenate us, make the years slip away. 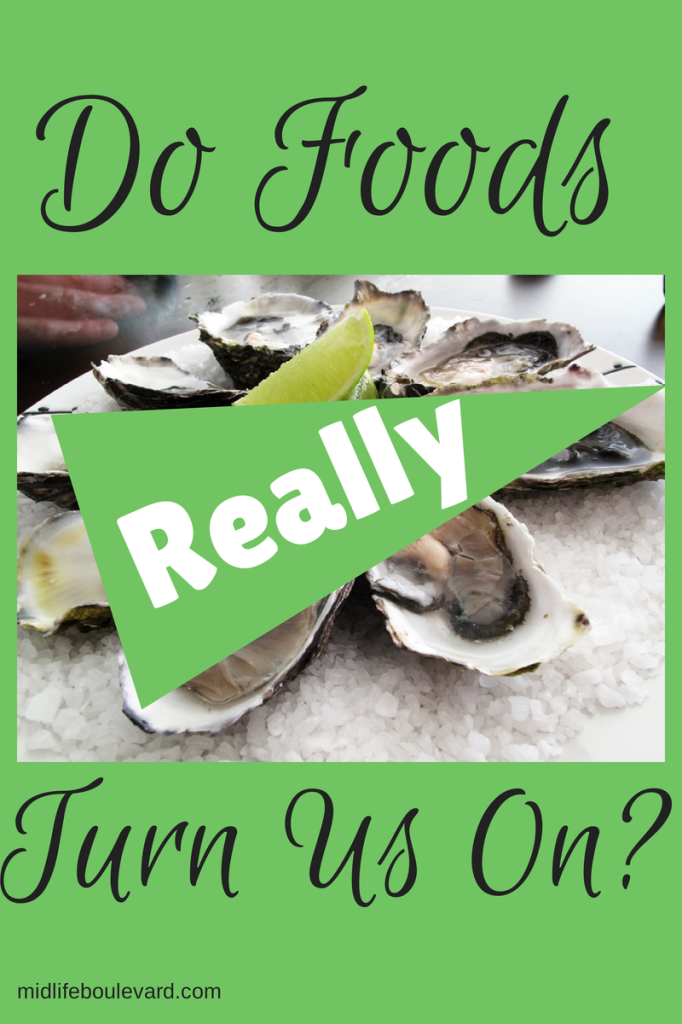 Dr. Bhimu Patil, the director of Texas A&M’s Fruit and Vegetable Improvement Center, studied the watermelon. His article “Watermelon may have Viagra-effect” was published in July 2008. He believes that watermelon consumption is beneficial to the body because of the phyto-nutrient citrulline, which is converted to arginine upon eating. Arginine is thought to promote heart heath, boost the immune system and “may prove to be very helpful for those who suffer from obesity and type 2 diabetes.” But the allure of watermelon is that citrulline-arginine has been shown to boost nitric oxide in the body. Nitric oxide helps to relax blood vessels, promoting the increased flow of blood, in the same way that Viagra works.

Dr. Patil cautions, “Watermelon may not be as organ specific as Viagra, but it’s a great way to relax blood vessels without any drug side-effects.”

Asparagus and strawberries are often called aphrodisiacal foods. But there’s no scientific proof to show they increase libido. There might be anecdotal evidence that slowly nibbling on a stalk of firm asparagus in front of your lover peaks his curiosity and excitement. Every Valentine’s Day, we are presented with yummy images of chocolate dipped strawberries, seductively placed between red, swollen lips.

The lure of seductive food is ancient history:

Most scientists and nutritionists will tell you that the scientific evidence on so-called aphrodisiacs is negligible. Figs, avocados, red wine, oysters, chocolate, spices like cinnamon and cayenne, all have nutritional value and therefore provide beneficial effects to the body. People who have poor diets, are obese and physically inactive are generally less likely to indulge in sex. A diet of coffee, cigarettes and fast food isn’t helping the heart, but rather clogs the arteries. Men who have clogged arteries are more likely to have difficulty with erections. Men and women who take care of their bodies and live healthy lifestyles tend to have a healthier sex life.

When we don’t feel good we don’t feel sexy. It’s really that simple. We search for the magic elixir but fail to consider the basics. A good diet, plenty of sleep and exercise, combined with a good relationship in which we communicate with our partners offer the best chance for a satisfying sex life.

By all means stock up on some fresh watermelon this summer. And make it a sensuous experience—feed each other partially clothed. Lick the juices on your partner’s chest. Luxuriate in the taste, the mix of cold and juicy, feel the stickiness on your bodies. Have a seed spitting contest and get playful. That will get your libido going.